It’s been a while since I last posted, I know, but I didn’t feel much like idle chit chat after the funeral, and then Walu and I went to San Francisco to escape the heat for a few days, and then school started back up…it’s an old story.

Anyway, I have lots of things saved up to talk about–so many, in fact, that I hardly know where to start. I’ve dithered about the issue for a couple of days now, and have finally decided to just jump in with whatever is foremost in my mind. I’ll get to all the other posts in due time.

So here’s what I’m spending much of my spare time on these days: building a new bike. The bits and pieces came via UPS while we were in San Francisco: 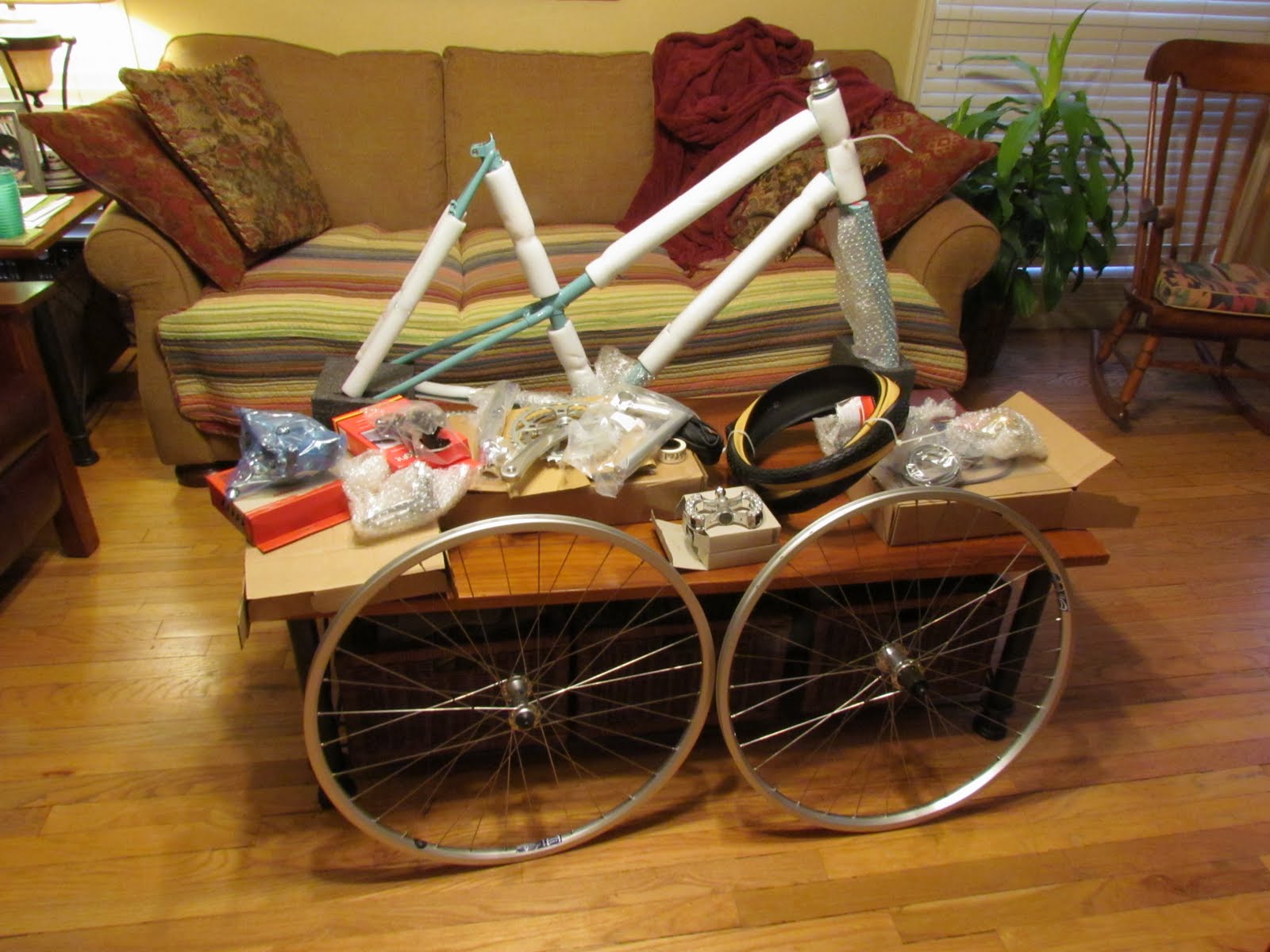 I’ve long had the idea that I’d like a bike I could throw a handlebar bag onto, loaded with a camera and a lunch, and go rambling around for hours at a piddling pace–an old-fashioned European touring bike, if you will. (Of course, this begs the question that there is anything in or around LBB that might invite rambling and touring.) The Ruby and the Salsa, much as I love them and as much as they serve their own, specialized, useful services, are simply not comfortable enough for me to imagine spending long hours in the saddle on them. The problem seems to be with the drop bars and the beating my hands take on them. More than 20-30 miles, and I am done with the rambling fantasy.

Neither bike has the geometry for a handlebar bag, either, though I have, in fact, been putting one on the Ruby lately so that I can carry a camera along on my rides. Even so, there just isn’t anything remotely “rambly” about the Ruby. She is built for one thing, and that thing, on a person with better legs than mine, is speed. The Salsa might be a little rambly, but she’s just not super comfortable.

Nevertheless, in an experimental mood earlier this year, I switched the drop bar on the Salsa for a pair of Nitto Dove handlebars (swept-back, or “North Road” style). What I got was less than satisfactory. Not only did I immediately develop knee problems from the change in geometry, but there was also an obvious loss of speed. I got, in short, a bike that was neither a fast commuter (which La Chica was before) nor a rambler capable of going long distances comfortably.

I’ve wanted a Rivendell for a couple of years, and the Betty Foy, in particular, for the last year or so, since it seemed to fit the profile of what I wanted exactly. Rivendell is reputed to be extraordinary bikes–durable, well-made, exceptionally comfortable to ride–indeed, the very ramblers I’ve been fantasizing about. Short of a custom-built randonneuring bike, they are probably the best on the market for a person searching for such a steed. So when I got a little discretionary money in the form of a paycheck for a summer course I taught at Mary Baldwin College in June, I thought I knew a good way to spend it. Even so, it took me almost two more months to make up my mind to place the order. I mean, how many bikes does one person need?

Ironically, it was a bit of a car-trouble that gave me the push I needed. My Subaru had some hiccups when I was traveling back and forth between San Angelo, and since it is nearly ten years old, I started thinking that maybe I should look into getting a new car. But then–miracle dictu!–the hiccuping turned out to be a very fixable problem, and suddenly I had a car that probably has a few more good years left in it. So if I wasn’t going to have to spend my money on a car…

Plus, all these bikes added up don’t even come close to what a new car would cost. Heck, they wouldn’t even add up to a good used car! Ok, maybe they’d add up to a mediocre used car, but you get my drift.

You see what kind of scary rationalization I am capable of.

Anyway, I called up Rivendell and in short order, the Betty Foy and most of her bits and pieces were on the way. (One can, of course, order a fully built bike from Rivendell, but why would an incorrigible tinkerer want to do that?)

This is the second bike I’ve built from scratch, the first being the Salsa Casserole. This one was a little easier since it came with the bottom bracket and headset/fork already installed. In no time at all, I had the guts of the bike put together, more or less in this order (the astute reader might notice that I started out in my shop, but I quickly determined that it was too STINKIN’ HOT to work  out there, and so was driven inside to my auxiliary shop, aka, the front living room): 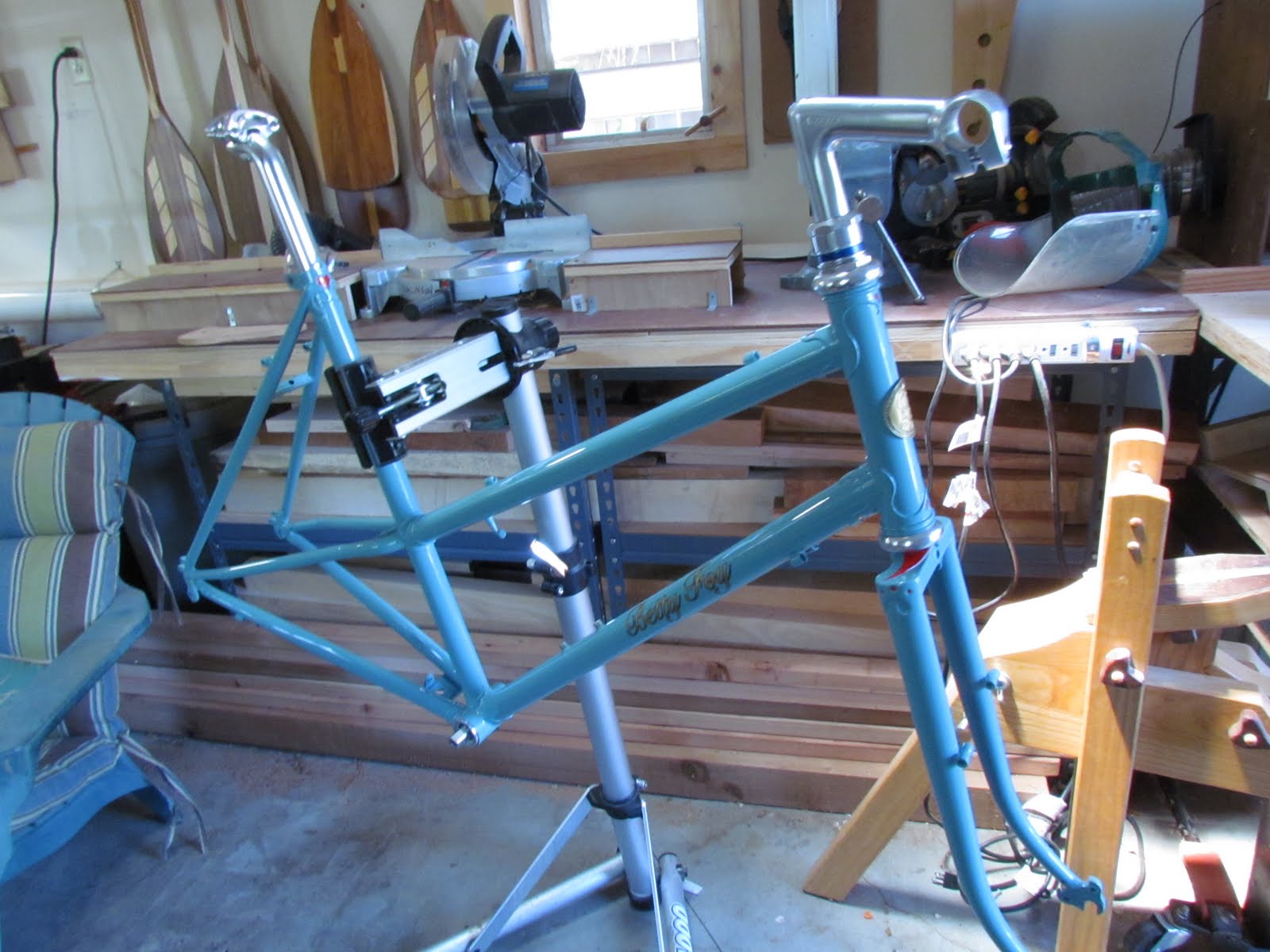 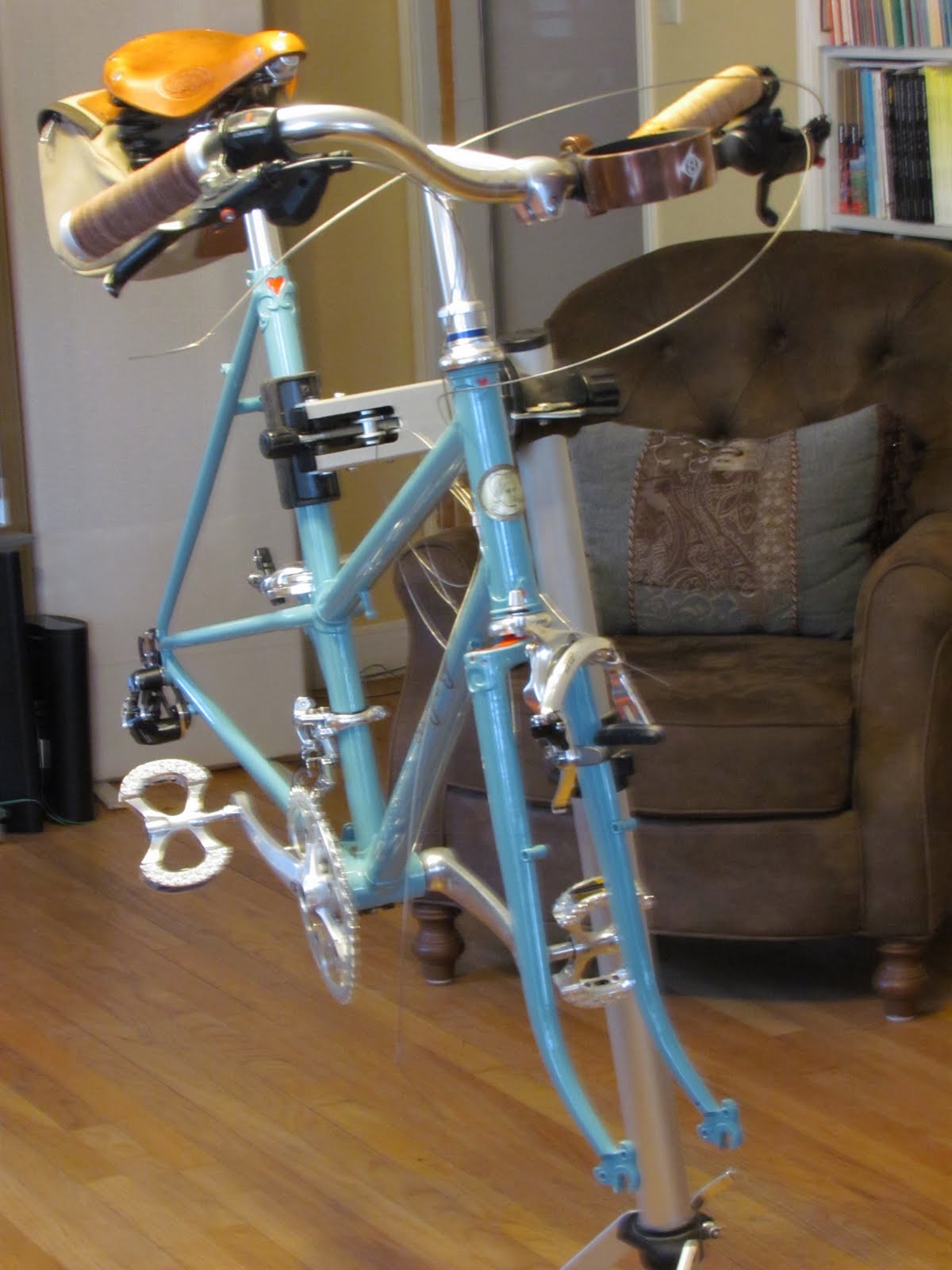 Bike for Dad is similar to the Bike for Luxury777 Mom cycling event where cyclists journeyed all over Thailand on bicycles in commemoration of the birthday of the Queen.

Bike for Dad is similar to the Bike for Mom cycling event where cyclists journeyed all over Thailand on bicycle in commemoration of the birthday of the Queen.